China has the longest combined land border in the world, measuring 22,117 km (13,743 mi) from the mouth of the Yalu River to the Gulf of Tonkin. China borders 14 nations, more than any other country except Russia, which also borders 14. China extends across much of East Asia, bordering Vietnam, Laos, and Myanmar (Burma) in Southeast Asia; India, Bhutan, Nepal, Afghanistan, and Pakistan[q] in South Asia; Tajikistan, Kyrgyzstan and Kazakhstan in Central Asia; and Russia, Mongolia, and North Korea in Inner Asia and Northeast Asia. Additionally, China shares maritime boundaries with South Korea, Japan, Vietnam, and the Philippines.

The territory of China lies between latitudes 18° and 54° N, and longitudes 73° and 135° E. China’s landscapes vary significantly across its vast width. In the east, along the shores of the Yellow Sea and the East China Sea, there are extensive and densely populated alluvial plains, while on the edges of the Inner Mongolian plateau in the north, broad grasslands predominate. Southern China is dominated by hills and low mountain ranges, while the central-east hosts the deltas of China’s two major rivers, the Yellow River and the Yangtze River. Other major rivers include the Xi, Mekong, Brahmaputra and Amur. To the west sit major mountain ranges, most notably the Himalayas. High plateaus feature among the more arid landscapes of the north, such as the Taklamakan and the Gobi Desert. The world’s highest point, Mount Everest (8,848m), lies on the Sino-Nepalese border. The country’s lowest point, and the world’s third-lowest, is the dried lake bed of Ayding Lake (−154m) in the Turpan Depression. 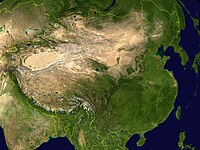 China’s climate is mainly dominated by dry seasons and wet monsoons, which lead to pronounced temperature differences between winter and summer. In the winter, northern winds coming from high-latitude areas are cold and dry; in summer, southern winds from coastal areas at lower latitudes are warm and moist. The climate in China differs from region to region because of the country’s highly complex topography.

A major environmental issue in China is the continued expansion of its deserts, particularly the Gobi Desert. Although barrier tree lines planted since the 1970s have reduced the frequency of sandstorms, prolonged drought and poor agricultural practices have resulted in dust storms plaguing northern China each spring, which then spread to other parts of east Asia, including Korea and Japan. China’s environmental watchdog, SEPA, stated in 2007 that China is losing a million acres (4,000 km²) per year to desertification. Water quality, erosion, and pollution control have become important issues in China’s relations with other countries. Melting glaciers in the Himalayas could potentially lead to water shortages for hundreds of millions of people.

editor - December 21, 2018
0
On the edge of the Tibetan Plateau in Sichuan, Ruogerai is fast gaining a reputation as a wildlife destination. Pallas’s cat and Chinese mountain...