Tongli is known for a system of canals, it has been given the nickname “Venice of the East“.

Being an ancient township, Tong Li borders on Tongli Lake on the east, Nanxin Lake on the south, adjoins Pangshan Lake on the west, Jiuli Lake on the north and Wusong Jiang River on the northwest. The town proper is divided by the streams into 7 islets interlaced with the surrounding water area, forming typical water county of the south. 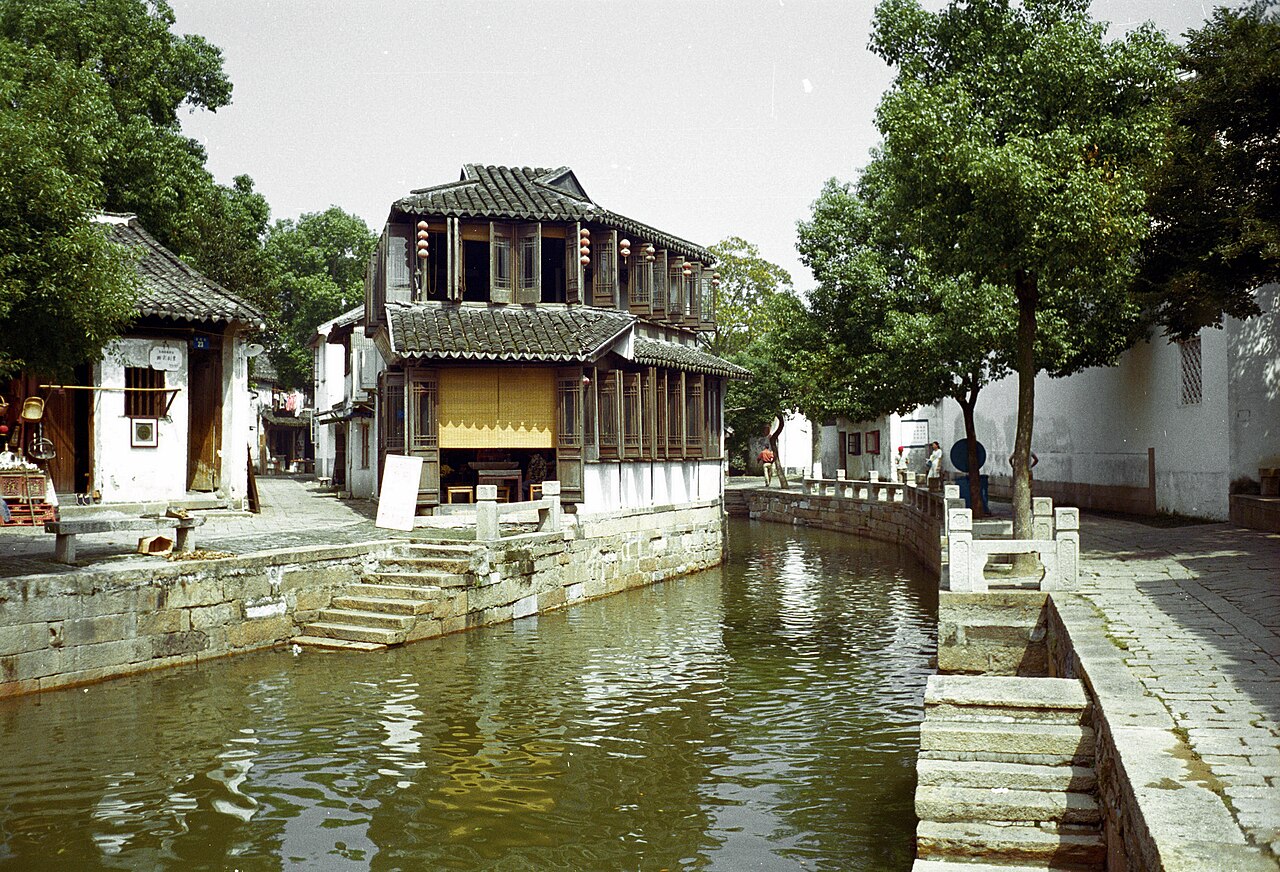 With a network of lakes and waterways, Tongli has not suffered from war since it was inaccessible in the old times. Therefore more ancient buildings are preserved, among which we can still enjoy the following scenic spots “ the Moon Viewing at the East Stream”, “the Misty South Market at Dawn”, “the Night Crossing at the West ferry”, “the Spring Sight in the North Hill”, “the Fishermen’s Flute in the Water Village” and “the Misty Bamboo of the Chan Hill”. The traditional houses densely settle on the sides of the fine banks piled by Jinshan Stone, and winding alleys and streets paved with pebble stones still keep the ancient appearance. There are 24 bridges at the intersection of waterways. The Siben Bridge built in the Southern Song dynasty is simple and archaic. The Fu’guan Bridge built in the Yuan dynasty is grandiose.

Tongli is rich in culture. In the long run of its history, it was once famed for its achievements in the imperial examinations and has produced famous cofucianists and notables. About 40 stone tablets of different periods have been well preserved and a quite number of its steets and alleys are named after the official titles such as Zhuang-yuan Street , Tongzhi Street , etc.

In the township of Tongli , the Ming an Qing buildings occupy four tenths of the total, among which there are grand as-many-as-nine-row houses, small exquisite courtyards and gardens. The gateway with the brick carving of Zhu Family and the wood carving of the Chong Ben Hall &Jia Yin Hall are extremely exquisite. The Yan-yi Building in the court of the Geng-le Hall is wrought so elegantly that it is like swallow flapping its wings. Huan Xiu Ge has two stories. If you remove the first floor board, fishes can be seen swimming in the clear pond beneath, full of vitality.

Lying in the township of Tongli , the Garden of Quiet Meditation was built by Ren Lansheng in 1886AD, the 11th year of the reign of Emperor Guangxu of the Qing dynasty, after he was discharged from office. “ When in office, one should be loyal to the emperor, when away from office, one should meditate upon his previous faults.”—- It was the motto of the officials in imperial times. Hence the name “the Garden of Quiet Meditation ”.

The garden covers an area of 10 mu. The western part is for dwelling, including 3 rows : sedan hall, tea hall and th main hall. There is also a spacious bedroom for the womenfolk. The eastern part is composed of the exterior and interior gardens. The whole construction shows no over-elaboration and reflects the peculiar architectural form of the late Qing dynasty. The 3 sides but the north of the exterior garden are halls for meeting or entertaining guests. Outside the exterior garden are pines, bamboos, wintersweet and artificial stalagmite. Inside in the courtyard is a eastward land boat, a rendezvous of the guests. The stern is combined with lattice windows and veranda.

The northern side of the courtyard is the “ Viewing Moon Loft”, from where the host together with his guests hummed verses and responded each other with poems in the quiet moonlight. In the interior garden, the pavilions, terraces, boudoirs, the winding causeways and corridors and the rockeries all surround the pond or lie close to the water, giving an illusion of floating on the water.

Although small in size, the Garden of Quiet Meditation embraces all the rockeries, ponds, buildings, vines, trees, flowers and plants that exist in the classical gardens south of the Yantze River . Furthermore, one can enjoy the scenes of the four seasons and those of guqin, chess, calligraphy and drawing. The whole garden, with the moderate and exquisite layout, amiable scenery, exhibits rich artistic flavors.