The Wuyi Mountains (武夷山) have been listed as a UNESCO World Heritage Site, for cultural, scenic, and biodiversity values since 1999. 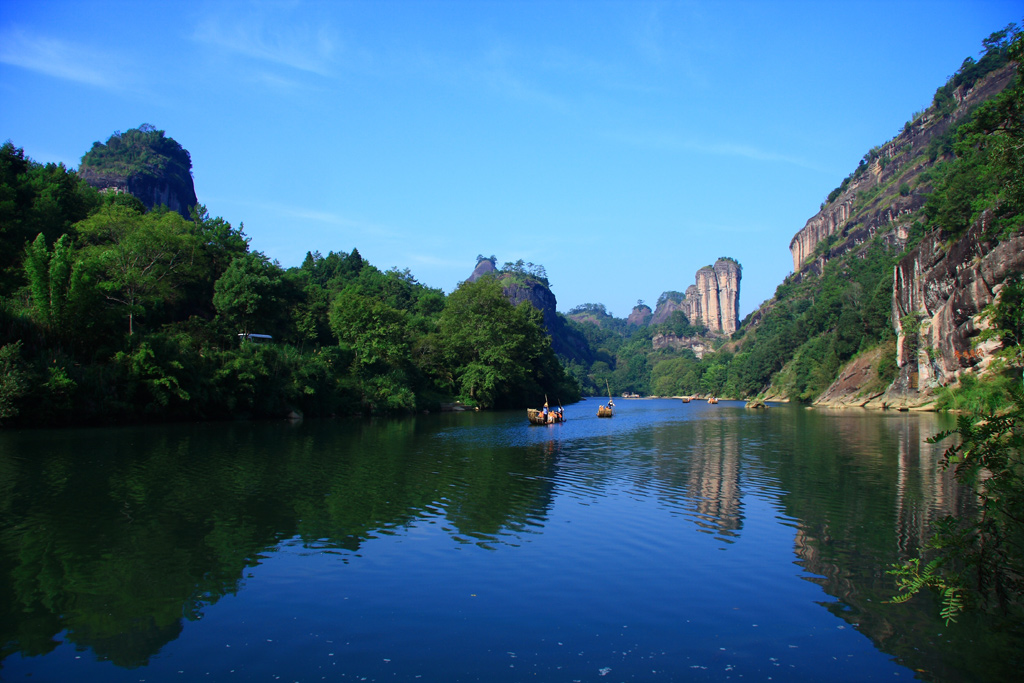 The region is part of the Cathaysian fold system and has experienced high volcanic activity and the formation of large fault structures, which were subsequently subject to erosion by water and weathering. The landscape is characterized by beautiful winding river valleys flanked by columnar or dome-shaped cliffs as well as cave systems. Peaks in the western portion of the Wuyi Mountains typically consist of volcanic or plutonic rocks, whereas peaks and hills in the eastern area are made up of red sandstone (particularly in the east) with very steep slopes but flat tops (Danxia landform). The Nine-bend River (Jiuqu Xi), about 60 kilometers in length, meanders in a deep gorge among these hills. Bedrock lithology at Wuyi Shan is dominated by tuff, rhyolite, and granite in the western part. Red sandstone is common farther east.

The highest peak in the area is Mount Huanggang at 2,158 metres (7,080 ft) on the border of Fujian and Jiangxi, making it the highest point of both provinces; the lowest altitudes are around 200 metres (660 ft). Many oolong and black teas are produced in the Wuyi Mountains, including Da Hong Pao (Big Red Robe) and lapsang souchong.

Human settlement on the slopes of Mount Wuyi can be traced back 4,000 years by archeological remains. During the Western Han Dynasty, the ancient city of Chengcun was the capital of the Minyue kingdom. In the 7th century, the Wuyi Palace was built for emperors to conduct sacrificial activities, a site that tourists can still visit today. The mountains were an important center of Taoism and later Buddhism. Remains of 35 academies erected from the era of the Northern Song to the Qing Dynasty and more than 60 Taoist temples and monasteries have been located. However, most of these remains are very incomplete. Some of the exceptions for which authentic remains are preserved are the Taoyuan Temple, the Wannian Palace, the Sanqing Hall, the Tiancheng Temple, the Baiyun temple, and the Tianxin temple. The area is the cradle of Neo-Confucianism, a current that became very influential since the 11th century.

The Wuyi Mountains have a long history of tea cultivation. The four most widely known varieties of Wuyi tea are referred to as the Four Famous Bushes: Big Red Robe, Iron Arhat, White Cockscomb, and Golden Turtle. Lapsang souchong also originates from the area.

The Wuyi Mountains are the largest and most representative example of Chinese subtropical forests and South Chinese rainforests’ biodiversity. Its ecology has survived from before the Ice Age around 3 million years ago. Biologists have been conducting field research in the area since 1873.

The fauna of the Wuyi Mountains is renowned for its high diversity, which includes many rare and unusual species. In total, approximately 5,000 animal species have been reported for the area. 475 of these species are vertebrates and 4,635 insects.

Mt.Wuyi area is the birthplace of tea picking opera. Developed from local folk dances and songs, the opera is hilarious and describes people’s daily lives. The Tea Picking Opera has strong rural flavour and basics of Hakka culture in its performances. This has made it popular in the local areas.