The Temple of Heaven is considered the most holy of Beijing’s imperial temples. It has been described as “a masterpiece of architecture and landscape design”.

The Temple of Heaven has also been listed as World Cultural Heritage by UNESCO. 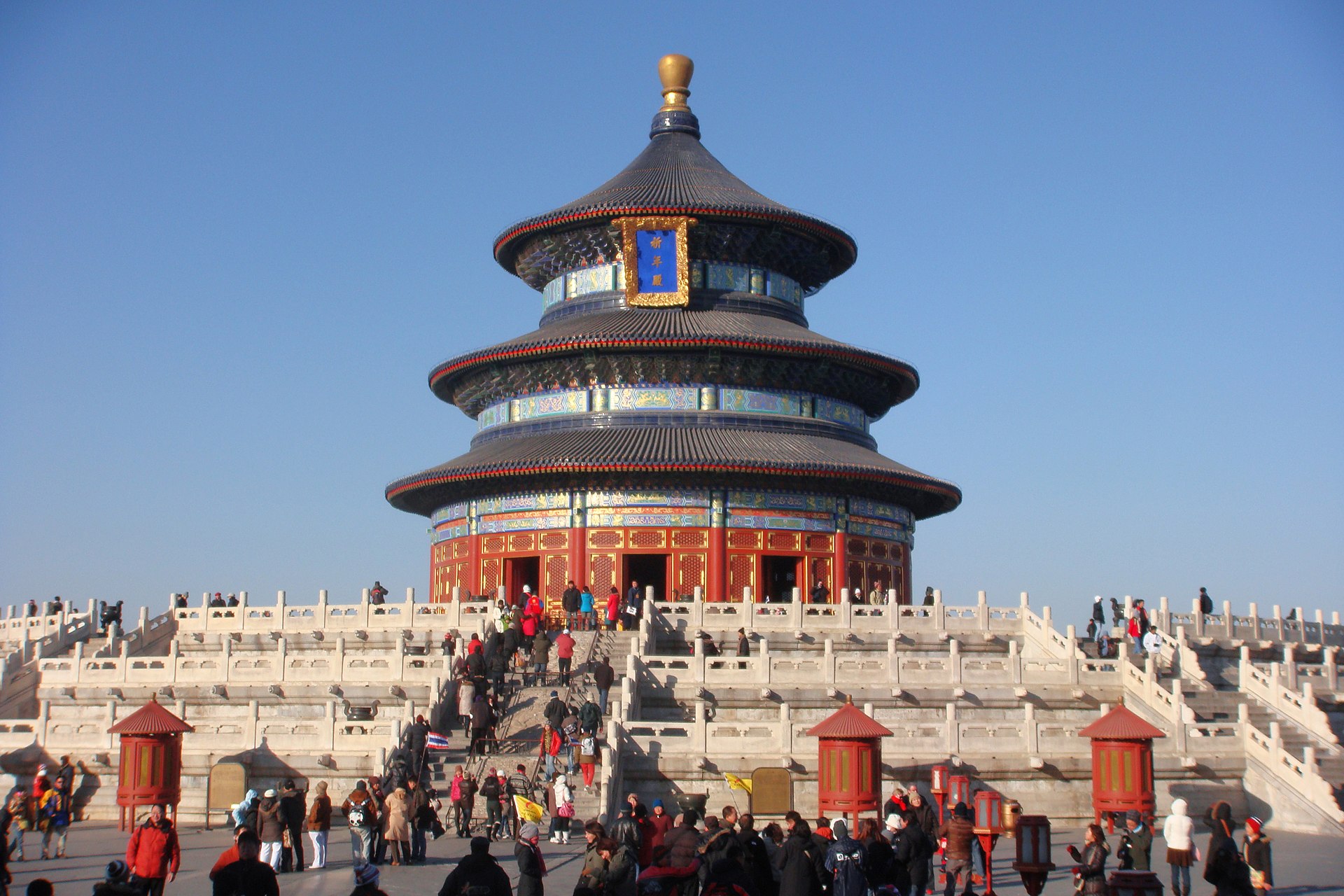 The temple complex was constructed from 1406 to 1420 during the reign of the Yongle Emperor, who was also responsible for the construction of the Forbidden City in Beijing. The complex was extended and renamed Temple of Heaven during the reign of the Jiajing Emperor in the 16th century. Jiajing also built three other prominent temples in Beijing, the Temple of Sun (日壇) in the east, the Temple of Earth (地壇) in the north, and the Temple of Moon (月壇) in the west. The Temple of Heaven was renovated in the 18th century under the Qianlong Emperor. By then, the state budget was insufficient, so this was the last large-scale renovation of the temple complex in imperial times.

Once a year, at winter solstice, the emperors came here to worship Heaven and to solemnly pray for a good harvest.

Since his rule was legitimized by a perceived mandate from Heaven, a bad harvest could be interpreted as his fall from Heaven’s favor and threaten the stability of his reign. So, it was not without a measure of self-interest that the emperor fervently prayed for a very good crop.

In line with the Confucianist revival during the Ming dynasty, the sacred harvest ceremony was combined with the emperor’s worship of his ancestors.

According to the Confucian pattern of social organization, just as the emperor respected his ancestors, so a younger brother should respect an elder brother, a wife her husband, a son his father, and a nation’s subjects their ruler.

Incorporating ancestor worship within the most solemn ceremony of the imperial ritual calendar indirectly reinforced the social philosophy that preserved the emperor’s power.

The design of the Temple of Heaven complex, true to its sacred purpose, reflects the mystical cosmological laws believed to be central to the workings of the universe. Both the overall arrangement and the buildings themselves reflect the relationship between sky and earth, the core of understanding of the Universe at that time.

Hence, complex numerological permutations operate within its design. For example, because the number nine was considered to be the most powerful, the slabs forming the Circular Altar have been laid in multiples of nine.

The Temple grounds cover 2.73 km² of parkland and comprises three main groups of constructions, all built according to strict philosophical requirements: 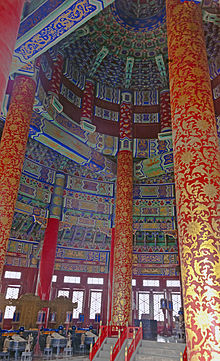 Earth was represented by a square and Heaven by a circle; several features of the temple complex symbolize the connection of Heaven and Earth, of circle and square. The whole temple complex is surrounded by two cordons of walls; the outer wall has a taller, semi-circular northern end, representing Heaven, and a shorter, rectangular southern end, representing the Earth. Both the Hall of Prayer for Good Harvests and the Circular Mound Altar are round, each standing on a square yard, again representing Heaven and Earth.

The number nine represents the Emperor and is evident in the design of the Circular Mound Altar: a single round marmor plate is surrounded by a ring of nine plates, then a ring of 18 plates, and so on for a total of nine surrounding rings, the outermost having 9×9 plates.

All the buildings within the Temple have special dark blue roof tiles, representing the Heaven.

The Seven-Star Stone Group, east of the Hall of Prayer for Good Harvest, represents the seven peaks of Taishan Mountain, a place of Heaven worship in classical China.

There are four main supportive, dragon pillars each representing a season. The structure, held up by these dragons, imitates the style of an ancient Chinese royal palace. Twelve inner pillars symbolize the lunar months, and it is thought that the twelve outer pillars refer to the 12 two-hour periods of the day.

In ancient China, the Emperor of China was regarded as the Son of Heaven, who administered earthly matters on behalf of, and representing, heavenly authority. To be seen to be showing respect to the source of his authority, in the form of sacrifices to heaven, was extremely important. The temple was built for these ceremonies, mostly comprising prayers for good harvests.

Twice a year the Emperor and all his retinue would move from the Forbidden City through Beijing to encamp within the complex, wearing special robes and abstaining from eating meat. No ordinary Chinese was allowed to view this procession or the following ceremony. In the temple complex the Emperor would personally pray to Heaven for good harvests. The highpoint of the ceremony at the winter solstice was performed by the Emperor on the Earthly Mount. The ceremony had to be perfectly completed; it was widely held that the smallest of mistakes would constitute a bad omen for the whole nation in the coming year.

Although in imperial times commoners were not allowed to enter the enormous park, now for a minimal fee everyone can enjoy it all day long.

Early morning is the best time to visit The Temple of Heaven. It is well worth waking up for; you will have an interesting experience watching local people doing morning exercises.

Next to an older person practicing the slow and flowing movements of tai chi there might be a youngster performing vigorous karate-like punches and kicks; one group might be learning the ancient martial art of sword fighting, while another would be practicing a traditional dance.