The Fujian tulou (福建土楼; literally: “Fujian earthen buildings”) are Chinese rural dwellings unique to the Hakka in the mountainous areas in southeastern Fujian, China. They were mostly built between the 12th and the 20th centuries. 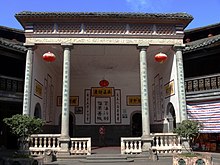 Zhenchenglou (振成樓), nicknamed “the prince of tulou”, belongs to Hongkeng Tulou cluster. It is located in Hongkeng village, Hukeng township of Yongding County. Inscribed as UNESCO World Heritage 1113-002 It was built in 1912 by the descendents of a rich tobacco merchant. Zhenchenglou is a double ring tulou, its outer ring is four storeys high, total 184 rooms, the inner ring is two storeys with 32 rooms. The outer ring was partitioned into four segments according to Bagua concept of Chinese Fengshui.

Western influence is evident in the Greek style columns of the ancestral hall, and in the wrought iron railing of the second level corridor.

Chengqilou (承啟樓) nicknamed “the king of tulou”, of Gaobei Tulou cluster 高北土樓群 at Gaobei Village (Gaotou Township) of Yongding County was built in 1709. Inscribed as UNESCO World Heritage Site 1113-003 in 2008. It is massive round tulou with four concentric rings surrounding an ancestral hall at the center, the outer ring is 62.6 metres in diameter and four storeys tall, 288 rooms, with 72 rooms on each level, circular corridor on 2nd to 4th floor, with four sets of staircases at cardinal points connecting ground to top floors. A large outward extending roof covers the main ring. The ground floor rooms are kitchens for family branches, the second level rooms are grain storage rooms, and the 3rd and 4th floor rooms are living quarters and bedrooms. The second ring of 80 rooms is two storeys high, with 40 rooms on each level, the third ring served as community library, one storey with 32 rooms; there are 370 rooms in all. The 4th ring is a circular covered corridor surrounding the ancestral hall. If a person stayed for one night in each room, it would take him more than a year to go through all the rooms. The ancestral hall is at the centre. Chengqilou has two main gates and two side gates. 15th generation Jiang clan with 57 families and 300 people live here. At its heyday, there were more than 80 family branches lived in Chengqilou.

Other buildings in this cluster include: a three ring Shenyuanlou, outer ring 70m diameter; a Wujiaolou (pentagon) with irregular pentagonal floor plan and a rectangular tulou, the Shi-Ze lou 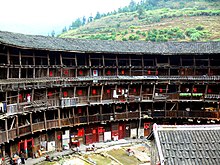 Yuchanglou (裕昌樓) is a five-storey tulou located at Nanjing County, Shuyang Town, Xiabanliao Village. It was built in 1308 Yuan dynasty by the Liu family clan. It is one of the oldest and tallest tulou in China. Yuchanglou has been nicknamed the “zigzag building”, because the vertical wooden post structure is not straight and perpendicular, but zigzags left and right. It was built that way due to an error measuring the building materials. But in spite of this apparent infirmity, this tall tulou withstood 700 years of natural elements and social turmoil. Yuchanglou’s outer ring is 36 m in diameter and boasts five storeys, with 50 rooms on each floor, 270 in total.

Each of the 25 kitchens on the ground floor at the back half of the circle has a private water well beside its stove. This is the only tulou in all Fujian with such convenient water supply.

There was a one storey inner-ring house surrounding the ancestral hall as late as 2003. This part of the building stood nearly 700 years intact until, unfortunately, it was dismantled after 2003.

Eryilou (二宜樓) of Dadi Tulou cluster is located at Zhangzhou City, Hua’an County, Xiandu Township, Dadi Village. Built in 1770 it consists of a four-storey outer ring and a one-storey inner ring. The outer ring is 71 metres in diameter, with 48 rooms on each level. Eryilou has no circular corridor at the front of each upper level, instead it has a back corridor adjacent to the wall. The outer ring rooms are partitioned vertically into separate households, each household partition has its own set of staircases not shared by other families; some partition has a frontal width of 3 rooms, others has width of 4 rooms. The partition of the inner ring is attached to the partition of the main ring via covered veranda as antechamber.

The Nanxi Tulou cluster (南溪土楼群) is the name applied to a section of the Nanxi (“South Creek”) Valley in Hukeng Town (Yongding County), which for a distance of several kilometers is almost continuously built up with tulous. For its striking visual effect, the area is referred to by some authors as the “Tulou Great Wall” (土楼长城). One of the tulous in this large cluster, the Yanxiang Lou (衍香楼), a round tulou in Xinnan Village (新南村, 24°36′22″N 116°58′30″E) figures on the World Heritage List as Site 1113-004.

Heguilou is the largest rectangular tulou, measuring 3,000 square meters and 21.5 meters high it is 5 stories high. It was built on swampland and is the tallest of the rectangular shaped tulous.

The layout of Fujian tulou followed the Chinese dwelling tradition of “closed outside, open inside” concept: an enclosure wall with living quarters around the peripheral and a common courtyard at the centre. A small building at the center with open front served as an ancestral hall for ancestry worshipping, festivals, meetings, weddings, funerals and other ceremonial functions. Ground floor plan includes circle, semicircle, oval, square, rectangle, and irregular pentagon.

The foundation of tulou building was built with paved stones on top of compacted earth ground, in two to three tiers. There is a circular drain around the top tier foundation to prevent rainwater from damaging the tulou wall.

In most cases, the weight bearing outer wall of tulou consists of two sections, the lower section is built from cut stone blocks or river cobbles held together with a lime, sand and clay mixture to a height of about one or two metres, depending upon the regional flood water level. The compacted earth wall stacked on top of the stone section. The construction of earth wall from compacted earth mixed with sticky rice and reinforced with horizontal bamboo sticks was described first in Song dynasty building standard the Yingzao Fashi.

The walls were built inclined toward the centre, such that the natural force of gravity pushes the wall together. This inward inclination method was also used in the construction of Pagoda of Fogong Temple. The thickness of the Tulou wall decreases with height as specified in Yingzao Fashi. The bottom two storeys of tulou are solid with no window nor gun hole, windows are open only from the third to fifth storeys, because rooms at the bottom storey served as family storage rooms and the upper storeys were living quarters.

The rooftops were covered with baked clay tiles, arranged radially;λ insertion technique was used at regular intervals to compensate for larger circumference at the outside.( Majority of roof tiles were laid from top to bottom, the gap caused by radial layout was compensated by small sections of tiles laid in λ shape inserts). This technique allowed the tiles to be laid radially without visible gaps, and without the use of small tiles at top, larger tiles at bottom.

The eaves usually extend about two metres, protecting the earth wall from damage by rainwater pouring from the eaves.

The wooden frame supporting the rooftop had no dougong elements common in traditional Chinese building.

Circular corridors from 2nd to uppermost level were made of wood boards laid on horizontal wooden beams with one end inserted into the earth wall. The corridors are protected with a circle of wooden railings.

Stairwells are distributed evenly around the corridors, four sets of stairwells being the usual number. Each stairwell leads from ground floor to the highest floor.

Public water wells in groups of two or three are usually located at the centre court; more luxurious tulous have in-house water well for each household in ground floor kitchen. Most tulous have in built water pipes to offer protection to the upper wooden floors against fire (either accidental or as a result of attack).

The Chengqi lou in Yongding county has long being considered to be the largest tulou, with diameter 62.5 meter. However, Huang Hanmig discovered that Shunyu lou(顺裕楼） in Nanjing county is even larger, with diameter 74.1. This tulou was built in 1933, it has four layers, with outer wall 15 meter high and 1.6 meter thick, with 64 rooms around a circle, one main entrance and two side doors. However, the title of “largest tulou” belongs to Fusheng lou(福盛楼), built since 1968 and completed in 1981; its diameter measured 77.42 meters. It is located in Chendong village of Yongding county.

Cuilin lou(翠林楼）in Nankeng township of Nanjing county is the smallest tulou, with diameter of 14 meter; this three storey tulou was built in 1617.

The ellpitic tulou Qiyun lou(齐云楼）in Shajian village of Hua An county is the oldest tulou, built in 1371.

Housing for a community of equals 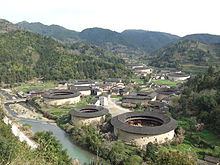 Unlike other housing structures around the world with architecture illustrating social hierarchy, Fujian Tulou exhibits its unique characteristic as a model of community housing for equals. All rooms were built the same size with the same grade of material, same exterior decoration, same style of windows and doors, and there was no “penthouse” for “higher echelons”; a small family owned a vertical set from ground floor to “penthouse” floor, while a larger family would own two or three vertical sets.

Tulous were usually occupied by one large family clan of several generations; some larger tulou had more than one family clan. Besides the building itself, many facilities such as water wells, ceremonial hall, bathrooms, wash rooms, and weaponry were shared property. Even the surrounding land and farmland, fruit trees etc. were shared. The residents of tulou farmed communally. This continued into the 1960s even during the people’s commune period; at that time a tulou was often occupied by one commune production team. Each small family has its own private property, and every family branch enjoys its privacy behind closed doors.

In the old days, the allotment of housing was based on family male branch; each son was counted as one branch. Public duties such as organization of festivals, cleaning of public areas, opening and closing of the main gate, etc., was also assigned to a family branch on a rotational basis.

All branches of a family clan shared a single roof, symbolizing unity and protection under a clan; all the family houses face the central ancestral hall, symbolizing worship of ancestry and solidarity of the clan. When a clan grew, the housing expanded radially by adding another outer concentric ring, or by building another tulou close by, in a cluster. Thus, a clan stayed together.

Nowadays newer housing with modern facilities is popping up in rural China. Many residents have bought more modern houses and moved out, or live in a larger town or city for better jobs. However they keep their ancestral tulou apartment homes under padlock, only returning home during festival for family reunion.