The Detian Waterfall (德天瀑布 [Détiān Pùbù]; Virtuous Heaven Waterfall) was said to be Asia’s largest transnational waterfall because it was shared by both China and Vietnam. Surrounded by picturesque karst peaks (more famously present in places like Guilin in China, Phang-nga Bay in Thailand, and Halong Bay in Vietnam), this was definitely one of the more scenic waterfalls we had seen let alone one of the most scenic waterfalls in the country. In addition, the falls was conducive to taking those silky long exposure photos so it was also very photogenic to boot!

The falls consisted of two parts. There was the main waterfall (named Detian Waterfall) on the Chinese side of the Guichun River, and then there was the Ban Gioc Waterfall (Banyue Waterfall [meaning half-way across?] in Chinese) on the Vietnamese side of the river. Julie and I had no trouble seeing both falls from the Chinese side, but we were not sure about actually getting up to the Ban Gioc Waterfall since we didn’t actually take a boat across the river (plus I’m not sure if there would be border implications in doing that).

In terms of experiencing this waterfall, it was pretty easy to do. A walking path allowed Julie and I to get right up to the main waterfall on the Chinese side. That path ultimately climbed alongside part of the falls until we got up to the bottom of the uppermost tier. Then, the path stopped as we had to be content with taking partial profile views of the falls as well as enjoying the downstream views above the lower tiers of the Detian Waterfall.

The closer to the waterfall that we got, the less of it that we were able to see. But at least we were able to feel a little bit of the spray from the falls to help alleviate some of the discomforting stickiness brought about by the stifling heat and humidity. And regardless of where it was cooler and mistier, there was no relief from mosquitoes.

A separate path branched off the aforementioned dead-end path, which then passed by a small shrine and eventually led us to the 53rd border marker right on the China-Vietnam border. We noticed that there was a little tented market consisting of vendors selling souvenirs as well as some local produce. It was quite interesting to hear both Vietnamese and Mandarin Chinese spoken simultaneously.

In addition to the path leading alongside the Guichun River to the 53rd border crossing with Vietnam, Julie and I also branched off the walkway and went up a series of steps (which were quite slippery when wet thanks to the combination of humidity and sporadic showers). The steps ultimately led us to an overlook that provided us with a wide open panoramic view towards the Vietnamese side of the river encompassing the entire Detian Waterfall plus the majestic and ghostly karst mountains in the background. It appeared the path kept going up but we didn’t explore further so we can’t say for sure what else was further up.

If there was one complaint I had about our visit, it would be that we happened to show up when Detian Waterfall was at its lowest flow of the year (late April). It was almost analogous to saying we were visiting Yosemite Falls in late August when it was either dry or barely trickling.

That said, this waterfall was still flowing fairly well, which strongly suggested that it was a permanent year-round waterfall though I can envision how much better it would have been in late Summer through Autumn when the falls would be its magnificent earth shattering self. Plus, the relative (and I do mean relative since we’re talking about China) quiet of this place deep in a humid rainforest flanked by terraces, old fashioned rafts, and jaw-dropping gorges made this a very pleasant getaway from the chaos of the country’s cities (where the crush of over a billion people can be a bit overwhelming).

From some of the signage and relics at the Detian Waterfall, it seemed apparent to us that this place had been the site of many conflicts with the Vietnamese. I believe it was said that there was a cannon perched atop one of the cliffs overlooking the area. During our visit, that trading market at the 53rd border tablet certainly was a stark contrast to the more turbulent history of the area. In any case, we didn’t feel comfortable straying too far into the other side of the border for we heard that border patrols were quite strict about entering either country illegally.

Julie and I actually spent a night at a hotel on the China side looking right at the Detian Waterfall. This allowed us to experience the falls in both the afternoon as well as the steamy early morning. It also afforded us the ability to enjoy the scenery without being in a rush. The only bad thing about our accommodation was that there were no mosquito nets around the bed, which meant that we were a little exposed to risk of contracting yellow fever or malaria, which Julie and I knew were carried by some of the mosquitoes in the area.

Anyways, perhaps one day we will return to this waterfall in a more reasonable time of year where we can see the falls in its “normal” flow. But for now, check out the photos here and take comfort in the fact that you’re likely to have better photos than we did of this wonder. 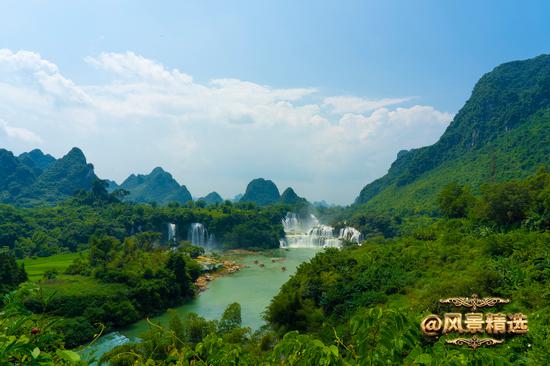 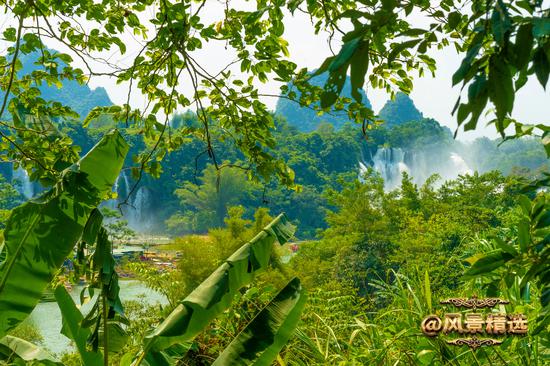 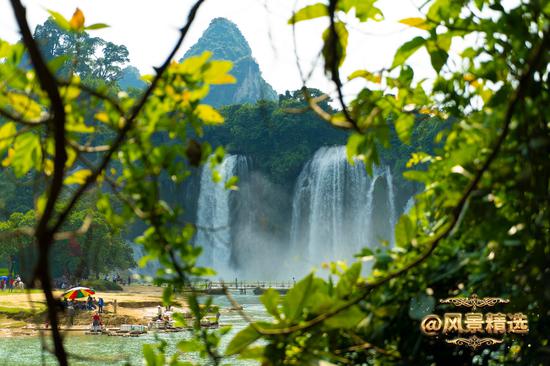 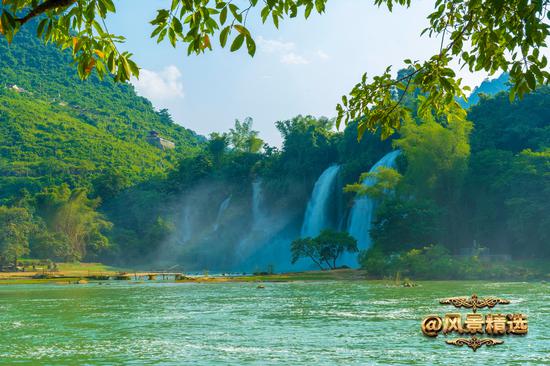 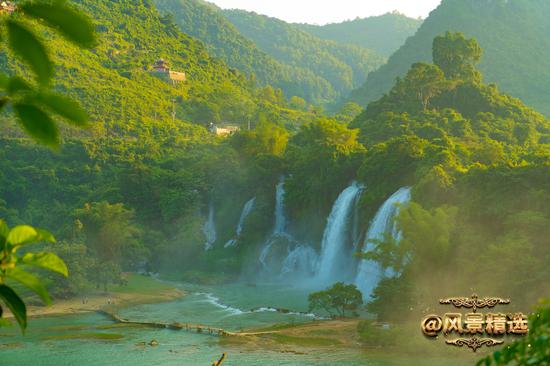 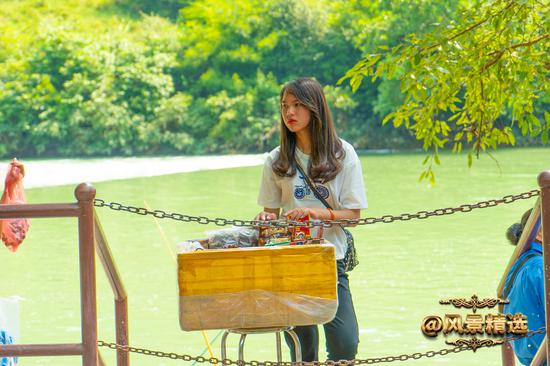 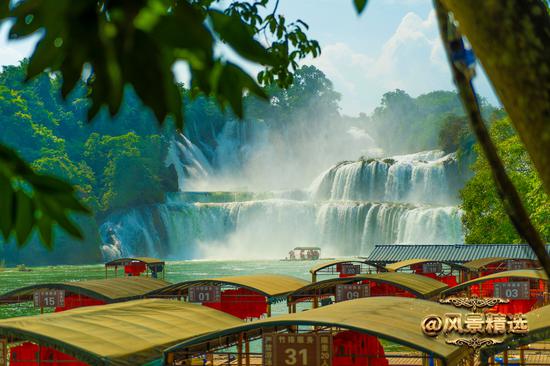 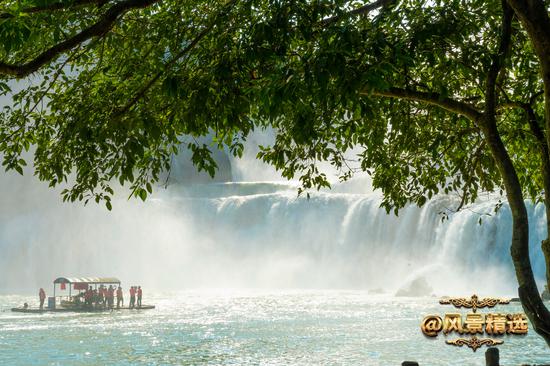 Detian Waterfall – the setting for the Journey of Flower

The Journey of Flower (花千骨) is a 2015 Chinese television series starring Wallace Huo and Zhao Liying. It is based on the fictional novel of the same name written by Fresh Guoguo, which is inspired from Daoistlegends regarding the path to immortality.

Hua Qiangu (Zhao Liying) is an unlucky orphan who is born with a strange scent which attracts demons, and therefore is hated and feared by all the villagers. When she faces danger, she is saved by a man called Mo Bing, who is actually Bai Zihua in disguise. Bai Zihua (Wallace Huo) is a kind-hearted immmortal who wants to protect all the Earthly beings. The only heavenly tribulation in his life is actually Hua Qiangu, whom he is tasked to kill by his master. However, after witnessing her kind heart and foreseeing her tragic future, he spares her life.

In search of her benefactor, Hua Qiangu heads to Mount Changliu, a sect that trains their disciples into becoming immortals. With the help of Bai Zihua, she passes through various trials to become his only disciple. As the two spend more time together, Hua Qiangu falls in love with her teacher, but doesn’t reveal her true feelings until the end. Eventually, the truth is revealed that she was born as Nü Wa’s descendant and has access to godly power. When Bai Zihua falls into danger, she summons the Demon God to save her master. The Demon God transfers all his power into her body afterwards, and Hua Qiangu falls into the world of Emptiness. She unleashes the Great Desolate Energy Force to become the new ruler of the Demons. Bai Zihua tries to get her to return to the righteous path, and comes to her side alone to accompany her. When Hua Qiangu realizes Bai Zihua’s true feelings for her, she decided to let herself be killed by him to restore peace to the world.

After Hua Qiangu dies, Bai Zihua feels extremely remorseful. One of the three masters from Changliu, Mo Yan, decided to use the power of nature to exchange his life for hers and restored her. In the end, Bai Zihua decides to leave Changliu to take care of Hua Qiangu.