Sêrtar, or Seda (色达) which means “golden horse” in Tibetan, lies in the southeast of the Tibetan Plateau and in the historical region of Kham. It is home to the Larung Gar Buddhist Institute, the largest Tibetan Buddhist institute in the world. The institute, which was founded by lama Jigme Phuntsok in 1980 and started off with just a few monks, now houses tens of thousands of monks and pilgrims from around the world.

High in a treeless valley in China’s remote Garze Tibetan Autonomous Prefecture lies the the largest Tibetan Buddhist school in the world. Founded in 1980, the Seda Larung Wuming Tibetan Buddhist Institute consists of a few main buildings and tens of thousands of small dormitories built on the surrounding hillsides. At any given time, the Institute houses up to 40,000 monks and nuns who come from different schools of Tibetan Buddhism: Nyingma, Gelug, Sakya and Kagyu. Students usually take six years to complete the formal training. Higher levels of training can take 13 years.

In the midst of these simple red houses lies an intellectual hotspot – the Seda Monastery – the world’s largest school for Tibetan Buddhism.

The stunning images were captured by photographer George Doupas who stood just 200 metres away from the Tibetan Seda, in Western Sichuan, China, to capture the view of the densely populated area.

Looming in the middle of the tiny hillside houses, the school has caused the surrounding neighbourhood to explode in size.

He said: ‘The school for Tibetan Buddhism in Seda is simply unique. I have never seen something like this before in my life, it’s a really amazing place.’

He added: ‘The number of houses there just shows how people are drawn to this holy place. I wonder what this will look like in ten years from now.

‘The monks go to school and study Buddhism every day. They have a few hours a day to rest but during the rest of the day they study and pray.’

The school first began life after the cultural revolution in 1980 and it is home to more than 10,000 monks and nuns.

There can be up to 40,000 monks and nuns in residence for some parts of the year and up to four scholars share a simple room and stay for up to three years.

Seda, known to Tibetans as Serthar is located in Ganzi prefecture in the west of China’s Sichuan province was briefly a hotbed of protests and violence since the Tibetan uprisings of March 2008.

The Seda Monastery has grown rapidly to become one of the most important Buddhist schools and the surrounding hillside is now home to the monks who study at the school.

The local residents from neighbouring villages, like the woman in traditional dress (below) also make the journey to Seda just to pray. 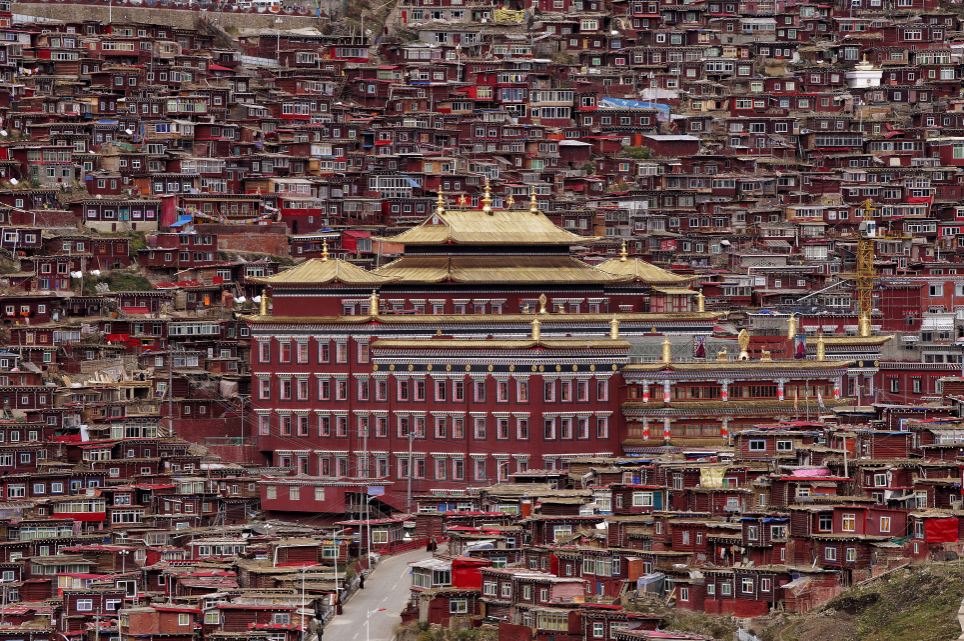 Stunning: Among these rows of simple red houses lies an intellectual hotspot – the world’s largest school for Tibetan Buddhism – pictured in the centre 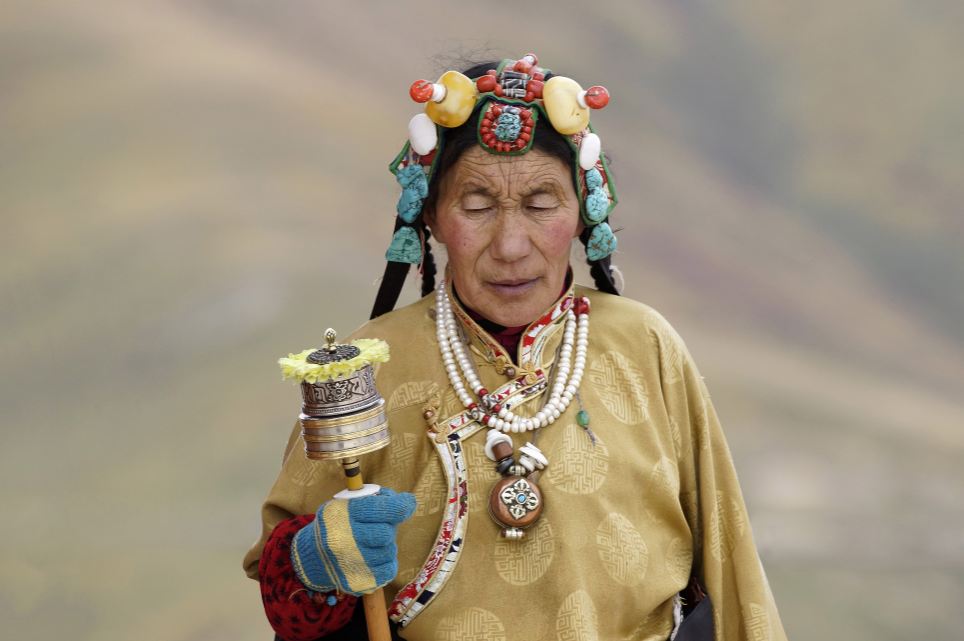 Prayer: People from neighbouring villages, like this woman in traditional dress make the journey to Seda just to pray 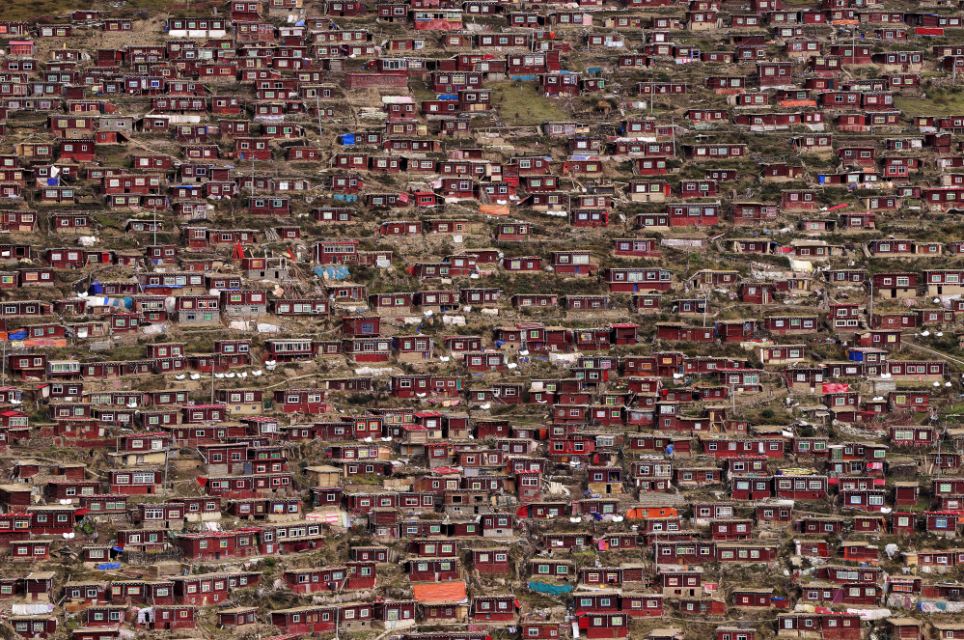 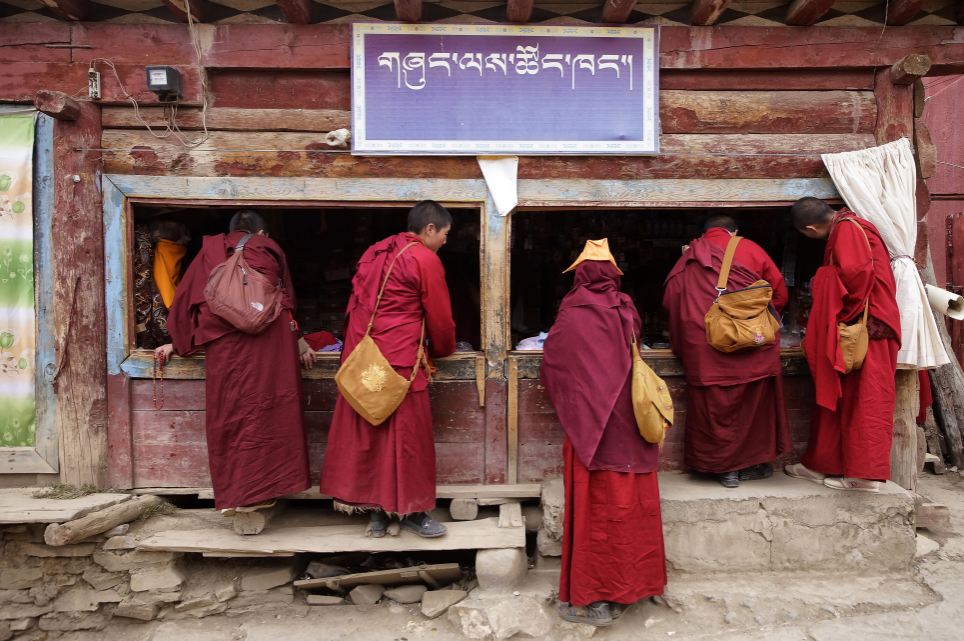 Monks: There can be up to 40,000 monks and nuns in residence at the world’s largest school for Tibetan Buddhism 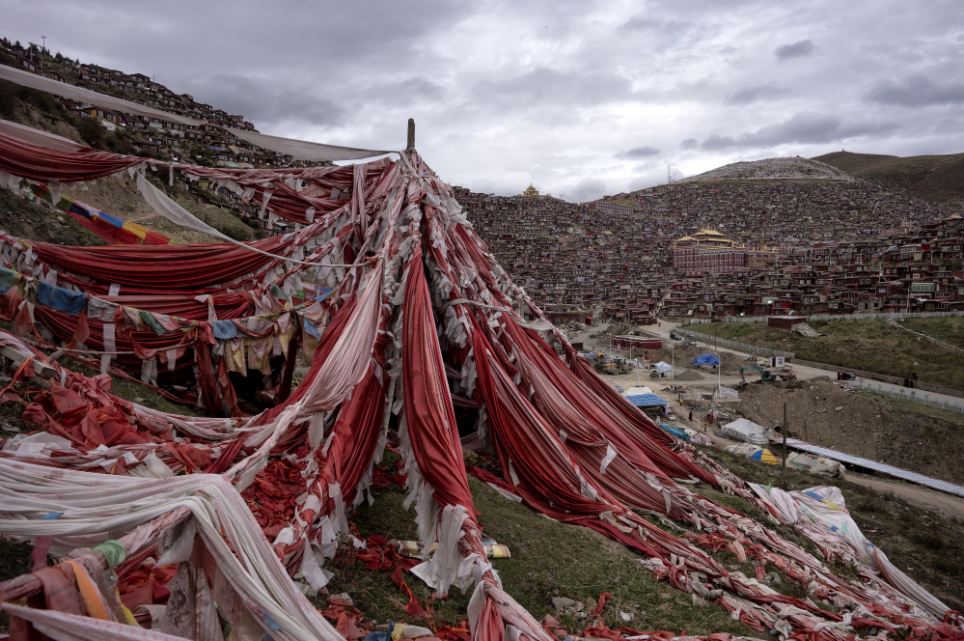 View: The number of houses show that people are drawn to this holy place 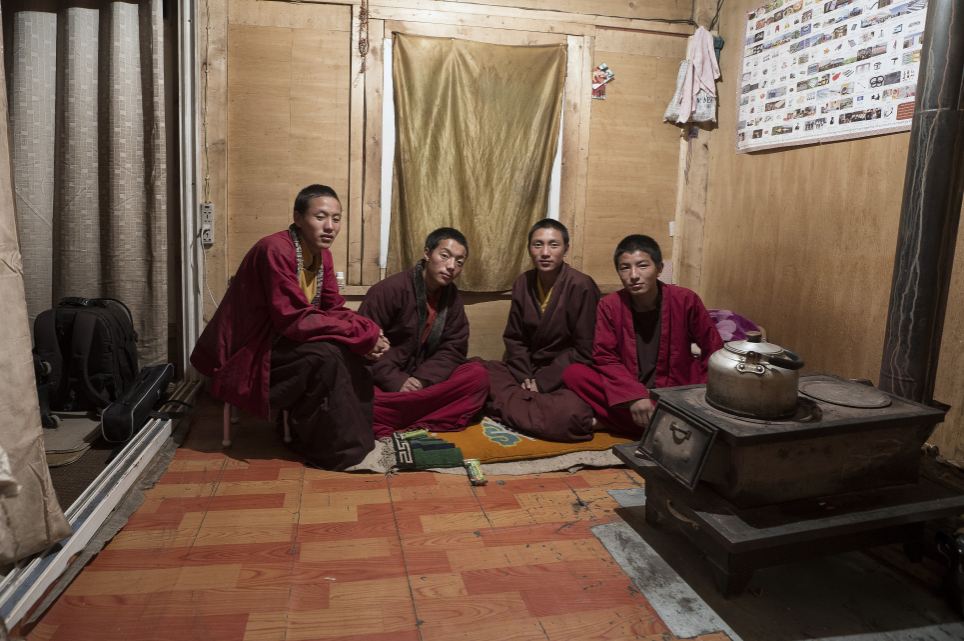 Holy: The monks go to school and study Buddhism every day, they have a few hours a day to rest but during the rest of the day they study and pray 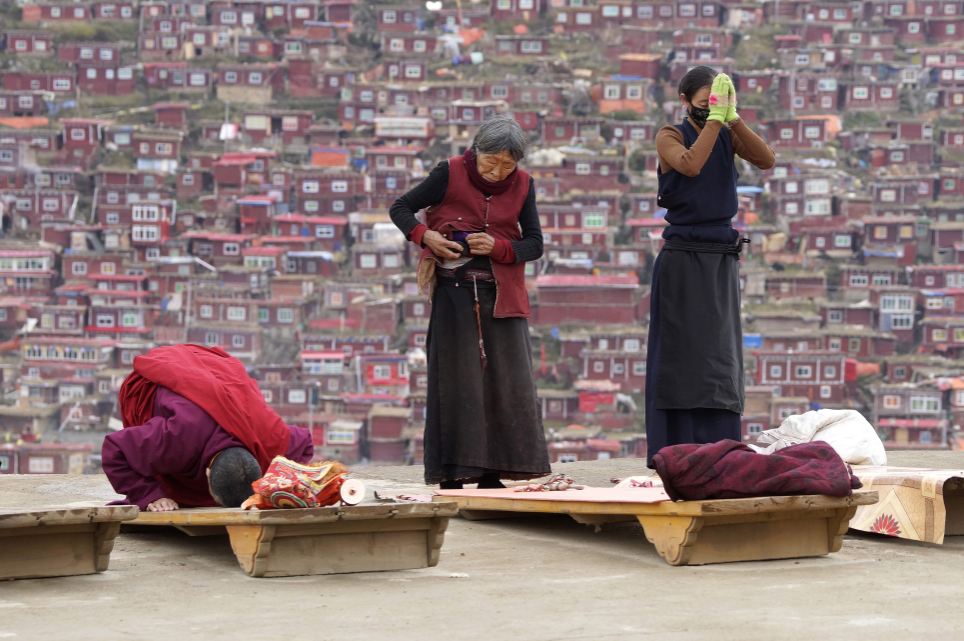 Worship: The school has caused the neighbourhood to explode in size but locals still take the time to pray 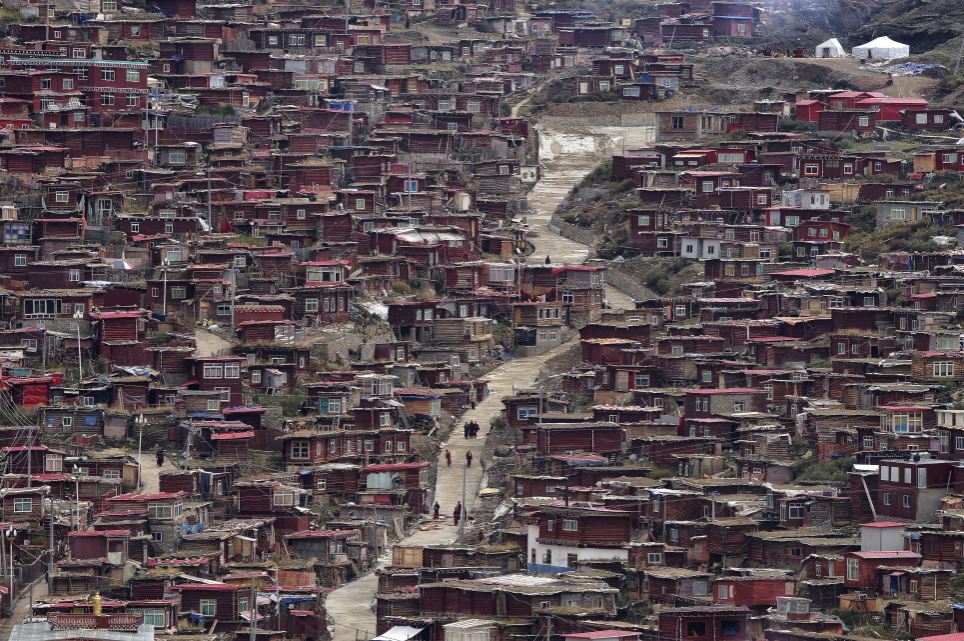 Houses: Having rapidly grown to become one of the most important and largest Tibetan schools, the surrounding hillside is now home to the studying monks 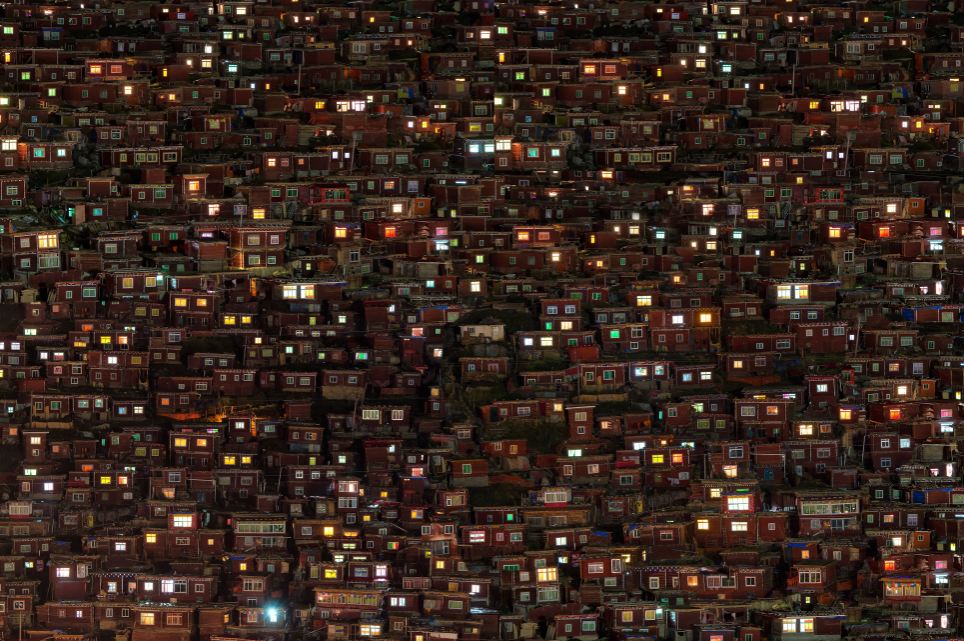 Night: Very simple rooms are shared by two to four scholars who usually stay for around three years.