Qiandao Lake (千岛湖 literally: “Thousand Island Lake”), is a huge reservoir covering an area of 580 square kilometers on the upper reaches of the Xin’an River, 160km from Hangzhou and Huangshan Mountain. It is an artificial lake formed as a result of being a reservoir for constructing Xin’an River Water Power Plant in 1959.

1,078 large islands dot the lake and a few thousand smaller ones are scattered across it. Over 90% of the area is forested. The islands in the lake include Bird Island, Snake Island, Monkey Island, Lock Island (featuring supposedly the world’s biggest lock), and the Island to Remind You of Your Childhood. The lake covers an area of 573 km2 and has a storage capacity of 17.8 km3 (4.3 cu mi). The islands in the lake cover about 86 km2.

Submerged in the lake, at the foot of Wu Shi Mountain (五狮山, “Five Lion Mountain”), lies an ancient city known as Shi Cheng (狮城, “Lion City”). It was built during the Eastern Han Dynasty (AD 25–200) and was first set up as a county in AD 208. The city acquired its name from nearby Wu Shi (Five Lion) Mountain, which is now known as Wu Shi Island since it too became partially submerged by the reservoir. At present Shi Cheng remains well-preserved.

Dashuzhen is a small and remote town with a handful of local shops and vendors. We stayed at a small hotel that was just 10-15 minutes by van to the dive staging area and boat dock. The hotel was fine for dive purposes (sleeping & showering) but it is definitely more on the adventurous of the accommodation scale. So if you choose to dive Qiandao Lake, be aware that you will not find any 4-star hotels near the dive sites.  It should also be noted that most of your food options while in Dashuzhen would be traditional Chinese dishes, prepared from fresh, locally farmed ingredients. This will undoubtedly thrill some people, while less adventurous eaters may have a tougher time.

Because this is a lake dive, it is important to understand the differences between the conditions encountered here vs. clear ocean water. All divers were required to do an initial checkout dive in the lagoon, which only reached around 25ft in depth.   Visibility at the surface was 5ft at best, dropping down to a mere 6 inches in some places at the bottom of the lagoon. This quickly made us realize how quickly the visibility could deteriorate, how easily you could become separated from your guide and how disorienting the conditions could become. If any group members had lapses in buoyancy or improper kicking technique that disturbed the sediment at the ruins, the dive could be completely destroyed for everyone.

Panoramic view of the calm waters of the lagoon at Qiandao Lake where we conducted our check out dive.

The dive boat can hold 6-8 divers and was docked in the lagoon near the dive staging area where we prepped our gear and suited up. Bathrooms and showers are located at the staging area as well. The Lion City dive sites are about 10 minutes by boat from the dock, and we dove as a group of 3 with our guide. The lake itself becomes dark very quickly as you descend, and dive lights are mandatory as it essentially becomes a night dive as you near the ruins, which lie between 85 – 130ft below. 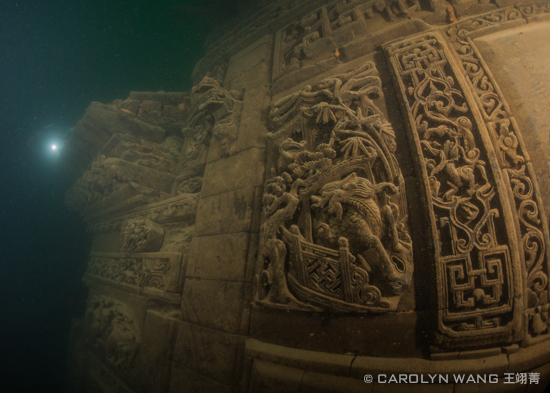 Your first glimpse of the ruins of Lion City will take your breath away. Clear structures appear out of the dark waters as you approach with your lights.  Thankfully the visibility at the ruins was much better than in the lagoon, topping out around 20-25 feet. 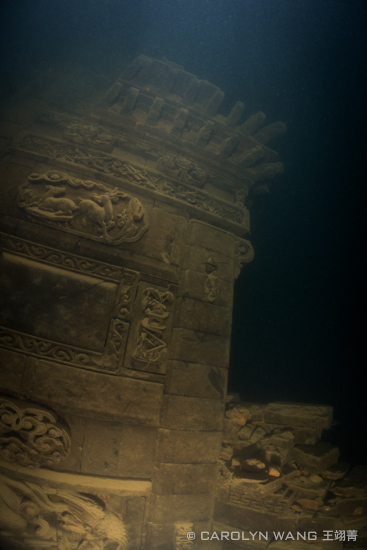 The beautiful city structures rise above you, covered with extensive carvings. 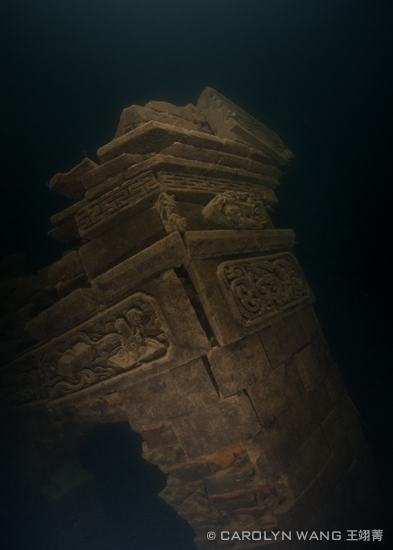 The upper right edge of an archway in Lion City. 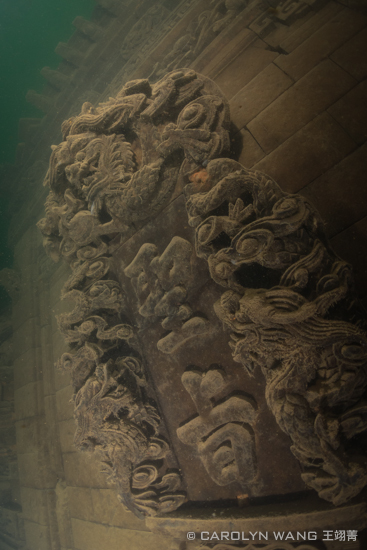 Lion City (Shi Cheng) has been submerged in Qiandao Lake for over 50 years since the building of the Xin’anjiang Reservoir and Xin’an River hydroelectric station in 1959. 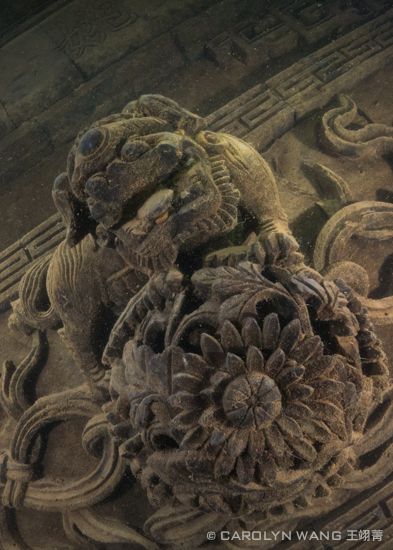 Another close up view of the ruins. Remarkable detail considering Lion City dates back nearly 1400 years to the Tang Dynasty. 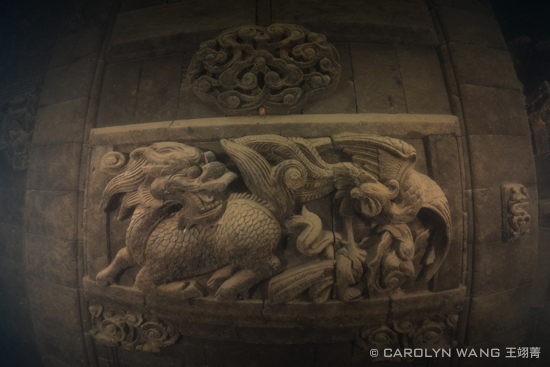 A gorgeously detailed dragon and phoenix in Lion City. 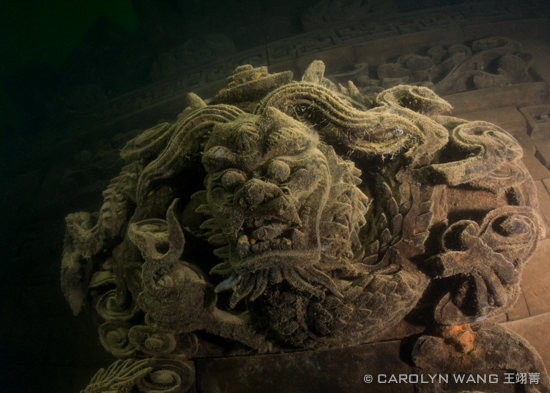 It’s amazing to see the rich, 3-dimentional detail characterizing the carvings on the city structures. 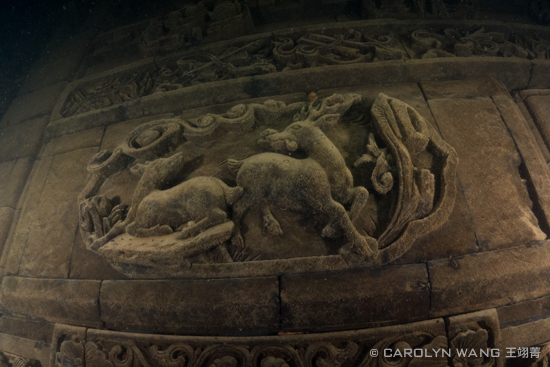 Free from the damages of sun, wind and rain, the lake has preserved the ruins relatively free of growth and intact. 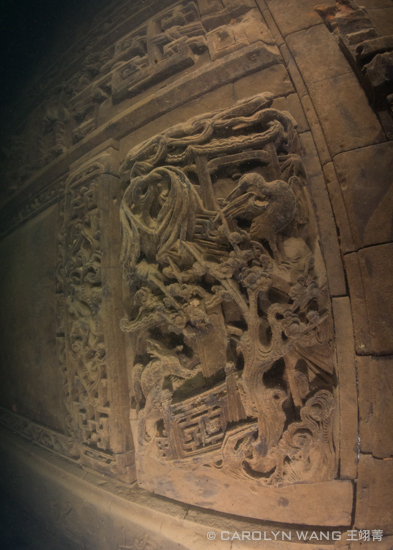 Panels and carvings cover nearly the entire surface of this Lion City wall. 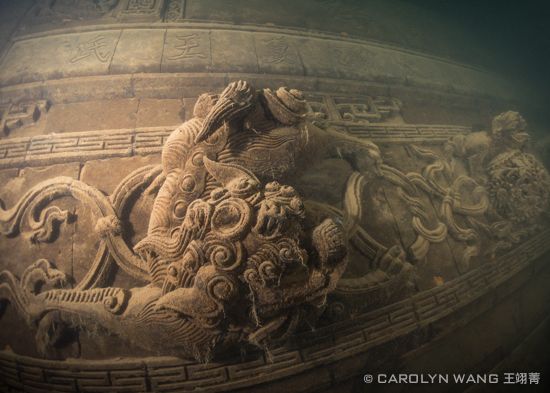 While it can be easy to stay fixated only on the animal carvings in the city, Chinese characters can also be seen carved into the walls, giving further context to the city. 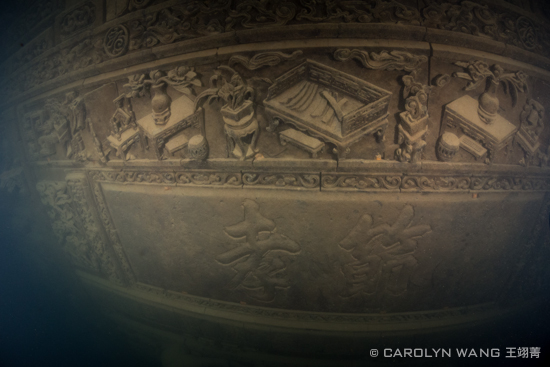 Another section of intricate carvings and Chinese characters on the city walls. 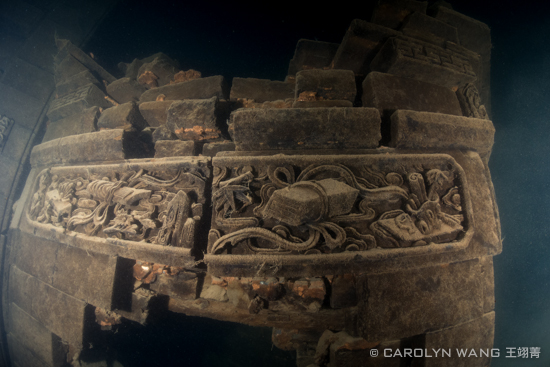 Detailed carvings adorn the top of one of Lion City’s 265 archways. 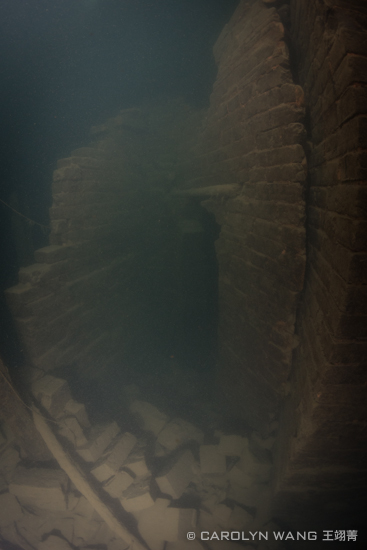 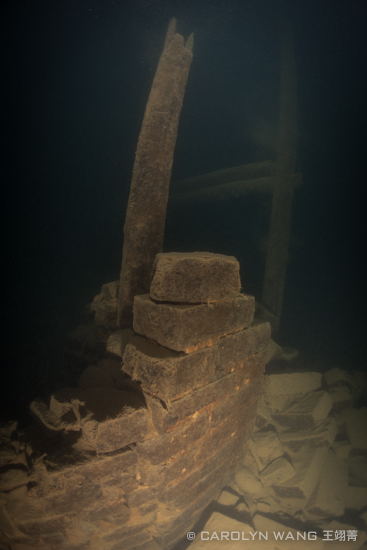 As we explored further, you could see some of the ruins have begun to topple over time. 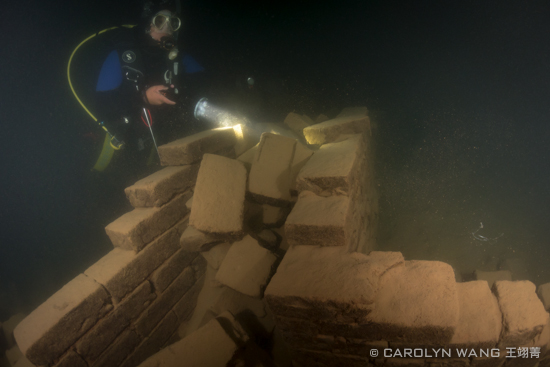 Our guide getting a close up look at some of the looser stones from city structures. 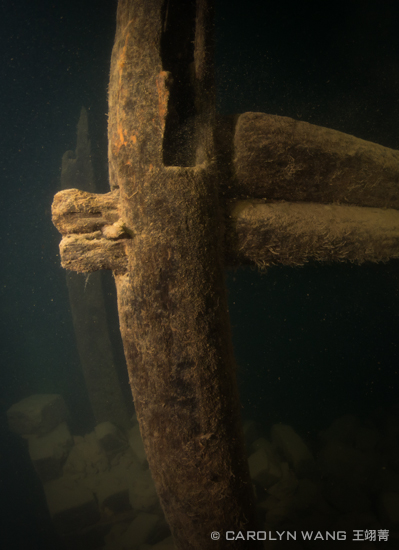 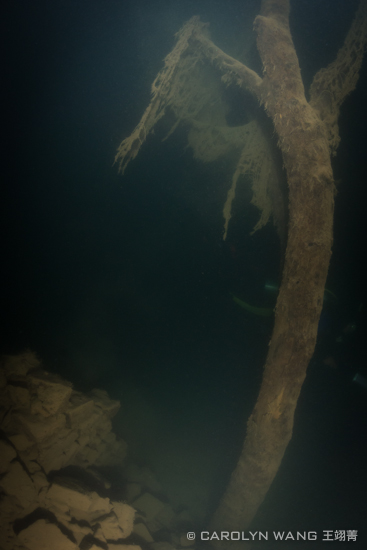 Photo left:  Both stone and wooden structures are visible at the ruins. The water actually preserves the wood quite well.  Some wooden beams that were recovered from Lion City during earlier dive expeditions quickly became damaged as they dried and shrank in the air.

Photo right: Interspersed amongst the structures, it was eerie to see the remnants of the trees that used to line the city when it was above water.