History: Before the Qin State in the Spring and Autumn Period (770BC-476BC) partly governed this area, Gannan was the domain of the ancient Qiang (later Tibetan) people, being one of the main birthplaces and residential areas of the Qiangs. It was in the year of 111AD that the Han Dynasty (206BC-220AD) brought Gannan into the feudal regime of Central China. It has played an important role in proving the relationship between the Han and the Tibetan. The south of the Silk Road and the Tang-Tibet Ancient Road all passed through this region. In 1954, the Gannan Tibetan Autonomous Prefecture was established with Hezuo City as its capital.

Physical Features: The prefecture lies in the northeast fringe of the Qinghai-Tibet Plateau at the transition area to the Loess Plateau. The terrain slopes from the northwest to the southeast. It can be divided into three parts: the southern mountainous region with moderate climate, being an important forest zone in Gansu; the eastern hilly area and the eastern meadows and grassland, being the main pasturing area of the province.

Labrang Monastery: the largest Tibetan religious and cultural center of the Gansu, Qinghai and Sichuan areas, that was first built in 1710 by the first Jamyang Living Buddha.

Langmu Monastery: consists of two Buddhist architecture groups separated by a brook with the north one belonging to Gansu and the south belonging to Sichuan. It was first discovered by some foreign backpackers and has become a well-known assembly area for backpackers.

Gahai-Zecha National Nature Reserve: mainly consists of two scenic spots, the Zecha Stone Forest and the Gaihai Migrant Nature Reserve. The former has lifelike stones and the latter is an ideal summer resort with the Gahai Grassland being one of the finest in Asia.

Sangke Prairie: is one of the most important stockbreeding bases. There are two reception centers equipped with Tibetan tents. Every July to September, they will prepare dainty food with Tibetan flavor as well as yaks, horses and bonfires to welcome the visitors.

Xiangbala Tourism Arts Festival, held annually in midsummer, is the largest comprehensive tourism festival in Gannan Prefecture. During the fifth and the sixth lunar months, there are various festivals and ceremonies, such as Xianglang Festival, Erecting Arrow Festival and Caihua (Flower Picking) Festival. 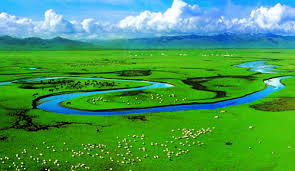 How to get to Gannan

Lanzhou is the main transfer station for south and southeast Gansu, whether by air, by train or by bus. Buses are the only vehicles to get in and out of Gannan. Visitors can find these buses at the New Lanzhou South Bus Station at the junction of No.212 National Highway and Lanzhou-Lintao (Dingxi City) Expressway. In addition, buses to Xiahe County, Langmu Monastery, Maqu County, Diebu (Tewo) County are available in the south bus station in Lanzhou. As the seat of the prefecture government, Hezuo City has many regular buses to surrounding regions, such as Lanzhou, Linxia Hui Autonomous Prefecture, Dingxi City, Aba of Sichuan Province and Xining of Qinghai Province. The bus station is located in Xiyi Lu.