Combining fresh sea air and dashing good looks, Qīngdǎo (青岛) – the name means ‘Green Island’ – is a rare modern city that has managed to preserve some of its past while angling a dazzling modern face to the future. Its blend of concession-era and modern architecture puts China’s standard white-tile and blue-glass developments to shame. The winding cobbled streets, historic German architecture and red-capped hillside villas are captivating and there’s so much to enjoy in the city’s diverse food scene, headlined by the ubiquitous home town beer Tsingtao. Meanwhile, the seaside aspect keeps the town cooler than the inland swelter zones during summer, and slightly warmer in winter.

Throughout history Qingdao has had several names: Tsingtau, Tsingtao, Jiaozhou. Tsingtau was a German concession from 1897 to until the First World War broke out in 1914.

For thirty three years, up to 1949, the city was a colony of Germany and Japan.

During the Seige of Tsingtao the Japanese took control of the region while declaring war on Germany. In 1919, the May 4th Movement was launched. Protesters against the Chinese government’s decision to yield to Japanese pressure demanded the recommencement of sovereignty over the region. The city reverted to Chinese rule in 1922, but was occupied by Japan again in 1938 during WWII. During this time the Japanese had plans of territorial expansion into China’s coastal cities. In 1945, after Japan’s defeat in WWII, Qingdao served as the headquarters of the Western Pacific Fleet of the US Navy. 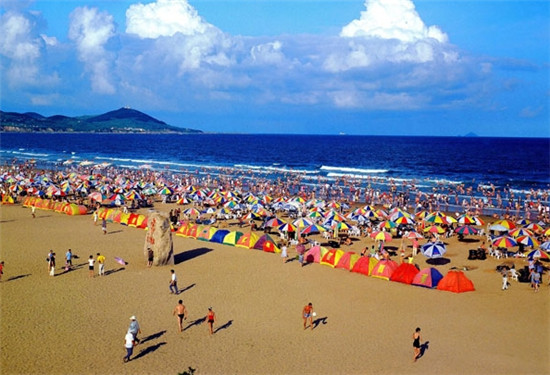 Located in the Huangdao district, the Qingdao Golden Beach Resort Area is in the shape of a crescent, with a length of more than 3,500 meters and a width of 300 meters. It is considered one of the finest beaches in China with the largest area and the most beautiful scenery.

Situated at the Qingdao Binhai University, the Ecomuseum of World Animals is a national AAAA-grade tourist attraction and national science education base. With an area of over 14,000 square meters and tens of thousands of exhibits, it is a comprehensive museum integrating natural ecology, animals, geology and oil paintings. 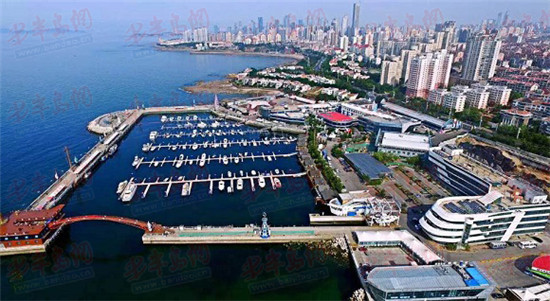 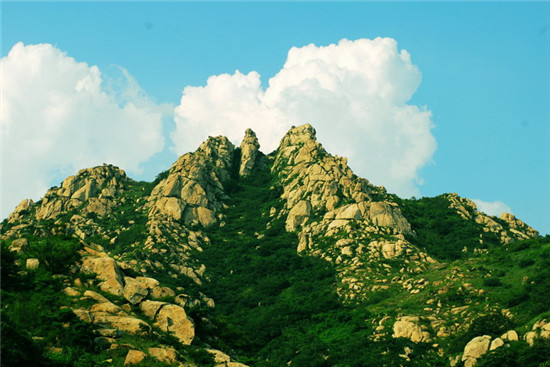 Qingdao Chashan Scenic Area, a national 4A (China’s second highest level) scenic spot is located in the highway transportation hub area between the Jiaodong Peninsula and the hinterland of Shandong province.

With a theme of “rocks, springs, flowers, temples”, the scenic area is composed of seven main functional areas, including an entrance service area, a children’s play area, an eco-tourism area, an experience area, a villa reception area, a pilgrimage area, and a water sports area. 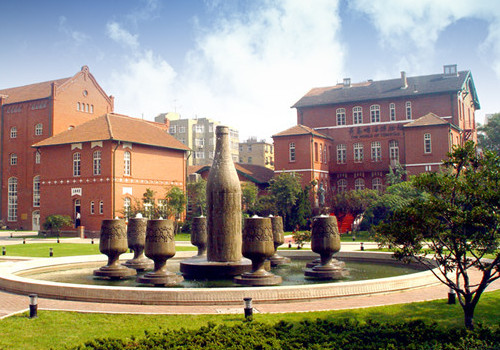 Established in August 2003, Tsingtao Beer Museum combines a sense of history with a truly modern setting.

The museum is located at No 58 Dengzhou Road, the “birthplace of Tsingtao beer” where for more than a century Tsingtao has produced its quality beverage for domestic and international markets.

As the only beer museum in China, Qingdao Beer Museum has been named a key national preservation unit of cultural relics and a 4A national tourist attraction, and has become a model of industrial tourism. 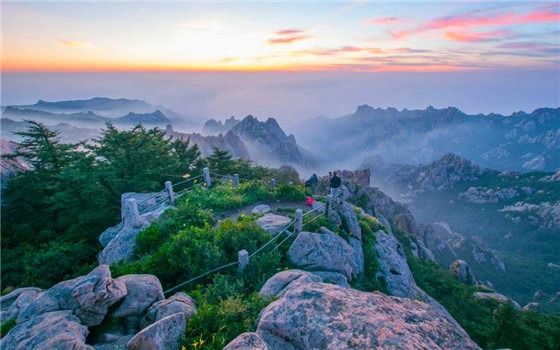 China has many famous mountains, including the “Five High Mountains”- its most famous peaks – but they are far from the sea, unlike 1,132-m Laoshan Mountain in Qingdao that has both grand vistas and a storied history.

Bordering Laoshan Bay in the east and close by the Yellow Sea in the south, ocean and mountains seem to link together at the towering peak often shrouded in mist.

A rock at the foot of the mountain is inscribed to note it is “the first famous maritime mountain”, paying homage to the fact Laoshan is the only peak on the sea in China over 1 km in altitude.

Along with verdant trees and waterfalls, the mountain has rocks that vary in shape so much that they can look human, or like animals, while others are known as “Beauty Rock” or “Fingers Rock”.

The ancient trees, together with plentiful birds and more than 1,000 kinds of flowers in spring and summer, help make Laoshan popular with those who like nature.

One of the most attractive spots is Beijiushui – or North Nine Waters – which flow through many bends, each noted as “a water”.

The mountain is also known for its mineral water, which is said to invigorate digestion and circulation – perhaps one of the reasons Tsingtao Beer is so popular. 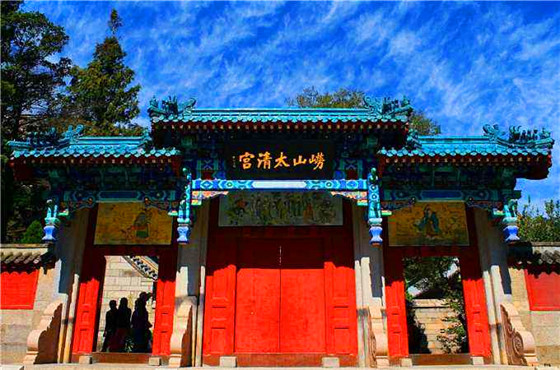 Taiqing Palace is the oldest and largest Taoist temple on Laoshan Mountain, dating back 2,100 years. Built during the Western Han Dynasty (206BC-AD24), the complex reached its current size – 30,000 sq m with 140 structures – during the Song Dynasty. 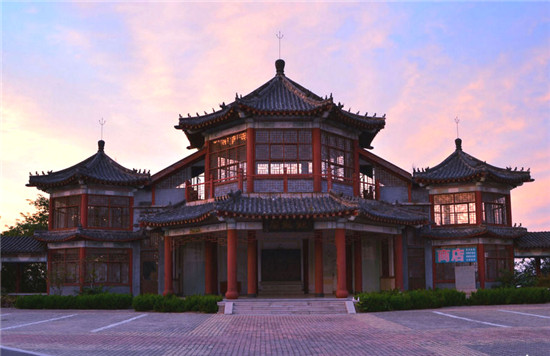 Located in Huangdao district of Qingdao, the Langyatai Scenic Area was assessed by the National Tourism Administration as an AAAA-level scenic spot in 2010.

With a special geographic environment and surrounded by the sea, Langyatai possesses a magic natural landscape.

Langyatai has been identified by the Chinese Astronomical Society as the earliest observatory in China. Many emperors and literary scholars, such as Qin Shihuang, China’s first emperor, came here throughout its history, leaving behind a wealth of historical and cultural relics. 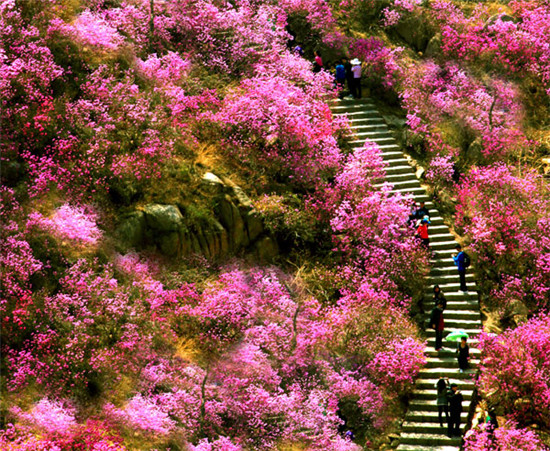 Dazhu Mountain Scenic Area is located in Huangdao district of Qingdao. It has numerous cultural and natural resources, and has been a place for seclusion, cultivation, and exploration since ancient times.

Acres of wild azaleas, a variety of strange peaks and rocks, and a rare natural Buddha make the area a good place for people to enjoy natural scenery, visit historical sites and get close to Buddhist culture.