Shennongjia Natural Reserve is a very famous place in China for at least two reasons. It’s a treasure trove of wildlife renowned since Emperor Shennong, who visited the mountains searching for herbs and using a ladder to collect some of the most precious ones from the rocks. Shennong is best known as the writer of one of the first Materia Medica. Hence the name Shennongjia, meaning the “Ladder of Shennong”.

Located in Hubei Province, in central-eastern China, the site consists of two components: Shennongding(神农架)/Badong to the west and Laojunshan to the east. It protects the largest primary forests remaining in Central China and provides habitat for many rare animal species, such as the Chinese Giant Salamander, the Golden or Sichuan Snub-nosed Monkey, the Clouded Leopard, Common Leopard and the Asian Black Bear. Hubei Shennongjia is one of three centres of biodiversity in China. The site features prominently in the history of botanical research and was the object of international plant collecting expeditions in the 19th and 20th centuries.

Shennongjia is located in the Shennongjia Forestry District and Badong County in China’s Hubei Province. Shennongjia is on the ecotone from the plains and foothill regions of eastern China to the mountainous region of central China. It is also situated along a zone of climate transition, where the climate shifts from the subtropical zone to warm temperate zone, and where warm and cold air masses from north and south meet and are controlled by the Subtropical Gyre.

The property covers 73,318 ha and consists of two components, the larger Shennongding/Badong component in the west and the smaller Laojunshan component to the east. A buffer zone of 41,536 ha surrounds the property. Hubei Shennongjia includes 11 types of vegetation which are characterized by a diversity of altitudinal gradients. The Shennongjia region is considered to be one of three centres of endemic plant species in China, a reflection of its geographical transitional position which has shaped its biodiversity, ecosystems and biological evolution. Hubei Shennongjia exhibits globally impressive levels of species richness and endemism especially within its flora, 3,767 vascular plant species have been recorded including a remarkable 590 temperate plant genera. In addition, 205 plant species and 2 genera are endemic to the property, and 1,793 species endemic to China. Among the fauna, more than 600 vertebrate species have been recorded including 92 mammal, 399 bird, 55 fish, 53 reptile and 37 amphibian species. 4,365 insect species have been identified. The property includes numerous rare and endangered species such as the Golden or Sichuan Snub-nosed Monkey, Clouded Leopard, Common Leopard, Asian Golden Cat, Dhole, Asian Black Bear, Indian Civet, Musk Deer, Chinese Goral and Chinese Serow, Golden Eagle, Reeve’s Pheasant and the world’s largest amphibian the Chinese Giant Salamander.

Shennongjia has been a place of significant scientific interest and its mountains have featured prominently in the history of botanical inquiry. The site has a special status for botany and has been the object of celebrated international plant collecting expeditions conducted in the 19th and 20th centuries. From 1884 to 1889 more than 500 new species were recorded from the area. Shennongjia is also the global type location for many species.

Shennongjia protects the largest primary forests in Central China and is one of three centres of endemic plant species in China. The property includes 11 types of vegetation and an intact altitudinal vegetation spectrum across six gradients including evergreen broad-leaved forest, mixed evergreen and deciduous broad-leaved forest, deciduous broad-leaved forest, mixed coniferous and broad-leaved forest, coniferous forest, and bush/meadow. With 874 species of deciduous woody plants, belonging to 260 genera, the tree species and genus richness of the site is unparalleled for a deciduous broadleaf forest type worldwide and within the Northern Hemisphere’s evergreen and deciduous broad-leaved mixed forests, Hubei Shennongjia contains the most complete altitudinal natural belts in the world. Hubei Shennongjia is situated in the Daba Mountains Evergreen Forests ecoregion and also within a priority ecoregion, the Southwest China Temperate Forest both of which are not yet represented on the World Heritage List. It also protects the Shennongjia regional centre of plant diversity which has been identified as a gap on the World Heritage List. In association with its floral diversity the property protects critical ecosystems for numerous rare and endangered animal species.

Shennongjia’s unique terrain and climate has been relatively little affected by glaciation and thus creates a haven for numerous rare, endangered and endemic species, as well as many of the world’s deciduous woody species. The property exhibits high levels of species richness, especially among vascular plants, and remarkably contains more than 63% of the temperate genera found across all of China, a megabiodiverse country with the world’s greatest diversity of temperate plant genera. The property includes 12.9% of the country’s vascular plant species. The mountainous terrain also contains critical habitat for a range of flagship animal species. 1,550 Golden or Sichuan Snub nosed Monkeys are recorded in the property. The Golden Snub-nosed Monkeys in Shennongjia are the most endangered of the 3 sub-species in China and are entirely restricted to the property. Other important species include Clouded Leopard, Common Leopard, Asian Golden Cat, Dhole, Asian Black Bear, Indian Civet, Musk Deer, Chinese Goral, Chinese Serow, Golden Eagle, Reeve’s Pheasant and the world’s largest amphibian the Chinese Giant Salamander. The property has extremely rich biodiversity, contains a large number of type species, and hosts numerous rare species which have been introduced into horticulture worldwide. Internationally, Shennongjia holds a special place for the study of plant systematics and horticultural science.

Shengnong Ding is the core of Shennongjia Nature Reserve. Four peaks of more than 3000 meters high combine to the ridge of central China and the confluence of Yangtze River- the Han River. Xiaguping scenic area is inhabited by Tujia Ethnic Group featuring unique ethnic customs and culture. Most parts of Dajiu Lake scenic area are wetlands of Yagao Mountain. In this scenic spot, tourists are able to see the highest peak in central China- the Shennongding Peak, scenery of clouds shrouding stones forests in Fengjingya, grassland scenery of Yagao Mountain, visit the paradise of golden monkeys- Jinhou Mountain and Shennong Stream. Further, visitors can track down the trace of wild men through Banbi Rock and Southern Heaven Gate, and traverse the primal forest cannon, even ski. 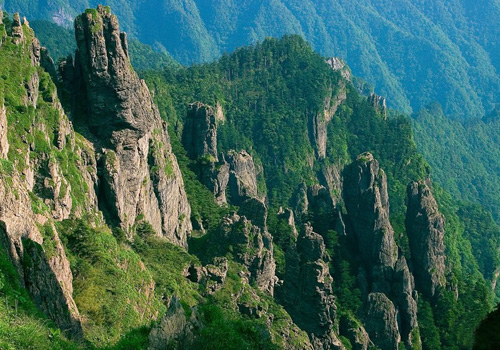 Yantian scenic spot sets a good example for developing eco-tourism. The three highlights in this are: Tianmenya, Yanziya and Hongping Gallery. Tianmenya is located 12 km from Hongping Town. It is 2,328m above sea level. Two peaks are connected by a bridge. Walking on the bridge brings to a fairyland of mists and clouds. Yanziya is formed when a bomb was used to blow the mountains apart and make the 209 National Road. It is famous for thousands of Himalayan Swiftlet living in a cave located 2300 meters above sea level. The ancient rhinoceros cave is discovered by archeologists in 1995 and was named as “the historic site of ancient human of Old Stone Age in Shennongjia”. The Hongping Valley is also called “Shennong’s ladder”. Scenery here is especially picturesque with lush foliages, steep cliffs, lofty peaks, pristine waters.

Located in the southeast of Shengnongjia Nature Reserve, Xiangxiyuan (literally Fragrant Stream Source) Scenic Area is composed of three spots: Xiangxi Source, Shennong Altar, and Laojun Mountain. Xiangxiyuan is the source of Xiangxi River. The water is said has nourished Wang Zhaojun (one of the Four Beauties of ancient China, lived in Han Dynasty, 202B.C.-220A.D.) and Qu Yuan (339-278B.C., the first great Chinese patriotic poet); it contains 14 kinds of minerals and legend has that Yan Emperor once cleaned medical plants there. Shengnong Altar was built in commemoration of Yan Emperor with a statue of Shengnong standing 21 meters high. Laojun Mountain is a heavily forested region. Legend goes that Laojun (Lao Zi, around 571-471B.C., the founder of Taoism) once practiced alchemy there, hence the name. Tourist can watch bonfire evening, listen to chime music, and hike along the Xiangxi River. 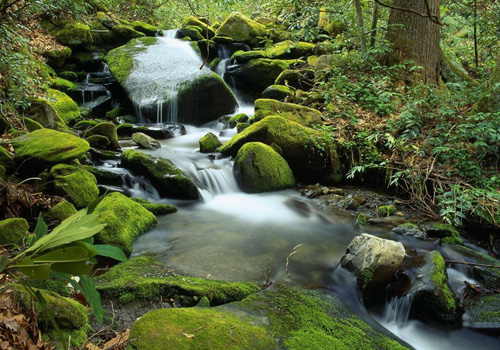 Yuanquan River Scenic Area is located at the northeast of Shennongjia. It is a comprehensive tourist area surrounding the Yuquan River (Jade Spring River), themed at expedition and challenge, and features high mountain lakes, streams and valleys. Being subdivided into three sightseeing areas, say, Songlang Mountain, Yuquan River and Zhangshu Lawn, it boasts over 30 scenic spots such as Shennongjia Ecomuseum, Liudao Gorge, Wushan Lake, Zhanggong Ancestral Hall. As the only regional natural museum in central China, the museum introduces the mysterious Shennongjia “wild men”, the ingenious root carving art, the ancient civilization of Shennongjia with fossils; it collects the only Rhinoceros sinensis fossil in the world. Liudao Gorge is a main river runs through Shennongjia Nature Reserve which flows easterly from Shennong Ding to Fenghuang Strip, Jinhou Mountan and Laojun Mountain, and the Wushan Lake, stands more than 600 meters high, offers fantastic lake landscape.

The Wild Man of Shennongjia is a mysterious figure as famous as Nessie and UFOs. The records of the Wild Man appear many times in ancient Chinese books, and since the 1970s, many people have declared that they had spotted The Wild Man. They are described to be ape-like, about two meters (6 ft.) high, covered by red or brown hair and can move very fast while standing erect. There have been many research studies held, which have yielded some evidence of the creature, such as the footprints and hair of The Wild Man. It is believed by many people that The Wild Man is an ancient species just like the giant panda and the golden haired monkey. Recently, some hikers and visitors also announced their sightings of The Wild Man. But to this day, no Wild Man has yet been caught.

Reaching Shennongjia is not easy. If you come from Yichang, in Hubei province, you have to pass through Muyuping, a small village about 150 kilometres away in the mountains. You can take a small bus that will eventually lead you there. The road is beautiful, in a deep valley with high cliffs. If you’re prone to bus-sickness, you’d better find another destination. Muyuping is a small mountain resort a few kilometres away from the gate of the park. The city lives from tourism. From Muyuping you can reach the Three Gorges Dam quite easily, taking a boat from Xingshan. So Shennongjia can also be a step in a journey from the centre to the west of China. Only a small part of Shennongjia can be visited.

From Shiyan
Take a coach from Shiyan Passenger Transport Center to Shennongjia. The bus departs at 09:00 and bus fare is CNY 85.

From Chongqing
Take a cruise ship and disembark from Badong Port. Then take a bus from Jubaopen Passenger Transport Center to Muyu Town at 07:30. Bus fare is CNY 61.

How to Save on a Trip to China